Home » Electronics » Slow Computer? Here’s Why You Should Upgrade to an SSD
Electronics

Slow Computer? Here’s Why You Should Upgrade to an SSD

The more reliant we are on our desktop and laptop computers, the more data they will contain. To prevent data loss, you want to ensure that you’re storing your information on a reliable hard drive or storage device. Upgrading to an SSD has many benefits that improve your computer performance and secure your data.

What is an SSD?

An SSD or Solid State Drive is a type of hard drive that does not have any moving parts. “Similar to a flash drive, it is basically chips and circuits instead of spinning platters like a traditional hard drive,” says Emily Lugo, owner of our Greensboro Central location. SSDs can be used anywhere that a hard drive can be installed.

How Is Upgrading to an SSD Beneficial?

Upgrading from a Hard Disk Drive or HDD to an SSD can significantly improve your computer’s performance. Here’s why making the switch can be beneficial to your device:

1. SSDs Are Fast and Efficient 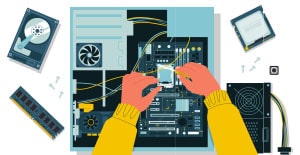 SSDs are known for their efficiency. Every item of data can be accessed instantaneously. This is a result of how the drive operates. SSDs run on electrical circuitry rather than physical moving parts, so they’re much faster. Due to this, you won’t have to wait as long when you boot up, launch apps, download, or retrieve data. SSDs also extend your computer’s battery life because they use less energy when operating.

Along with speed, reliability is one of the most notable assets of SSDs. In other words, they can last for quite a while. It has been noted that it would take an estimated daily use of 50GB on an SSD roughly 12 years before it wears out.

SSDs are also relatively inexpensive upgrades that offer much more functionality and storage space than their counterparts. Whether you use a Dell, Macbook Pro, Lenovo, or a Microsoft computer, the upgrade won’t break the bank.

How Do You Upgrade from an HDD to an SSD?

With Computer Troubleshooters, the process of transitioning from an HDD to an SSD is very simple. Lugo says at their location in Greensboro, “the user can drop off their machine, and we will swap out the old hard drive for the new SSD and clone their system so all their programs and data will be exactly the same on the new drive when they pick up.”

Who should consider upgrading?

Lugo recommends that anyone with a desktop computer or laptop with an older drive should consider upgrading. However, if your device is over 5-7 years old, it may be more optimal to purchase a new machine rather than investing in the upgrade.

Considering taking your device to the next level with an SSD upgrade? Visit Emily Lugo at the Computer Troubleshooters location in Greensboro Central, or search for your local CT office.

Do You Recommend Companies Use Ethernet or Wifi Networks?

Do You Recommend Companies Use Ethernet or Wifi Networks?

Why Invest in MDM Solutions Post-Pandemic?

We will be happy to hear your thoughts

At emandeville.com participates in the Amazon Services LLC Associates Program, which is an affiliate advertising program designed to provide a means for websites to earn advertising fees by advertising and linking to amazon.com

emandeville.com a participant in the Amazon Services LLC Associates,  affiliate advertisings program designed to provide a means for the sites to earn advertising fees by advertising and linking to Amazon.com